I remain determined to make over my office space until it’s fit for people, plants, and animals to enter. My goal is that all living things will want to stay a while once venturing inside. 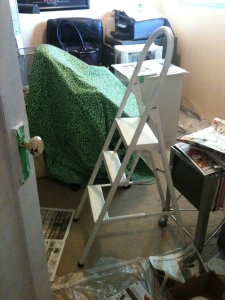 Painting is not for the faint of heart!

Lately, I’ve been up to my eyeballs in painting my new-to-me desk (much smaller than my old one, and much prettier, too). Then, of course, I had to get rid of the dark blue door to my office and other dark blue accents to match the new off-white trim of my birds-eye maple desk. This meant more painting, a job I’ve forgotten how much time and effort it takes.  Alas, I’m still in the primer stage now, but hope to have at least one coat of real paint on by the end of tonight.

Sigh of relief! I can see my desk again!

This is my second installment on the clean up of my out-of-control messy home office. I must have unleashed my best paper-fighting superpowers to get all this done in just one day, no?

I even got a lot done on my messy bookcase, a massive boxy thing that sits directly behind my desk. I’ll save that story for another post.

My office is not only fit for human consumption now, Pumpkin (our pussy cat) likes the space, too. She came in and slept at my feet. How great is that?

Aaack! How did this happen? It was only a few years ago that I did an entire re-organization of my home office space–and now this. It’s not only impossible to be productive in a mess like this, it’s downright demoralizing. And here I am facing two deadlines and one important meeting this week. To say I’m feeling overwhelmed is pretty much the understatement of the year. 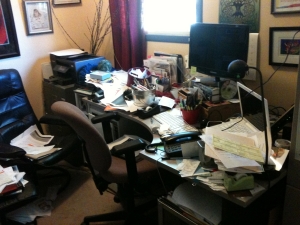 Alas, I haven’t seen the likes of Spiderman, Batman, or Superman coming to my rescue to fight off this dreaded Messy Desk Syndrome. This means I’ll just have to call upon my incredible Virgo organizational superpowers to deal with my paperly archvillian. (I guess my superpowers have been missing in action lately…)

I invite you to follow me along as I declutter, defrag, and deconstruct my office space so I can transform it into something beautiful, productive, and worthy of any living creature to spend time in it. I’ll be sure to post pics and strategies so you can not only see my results but also understand how they came about.

A very important person in my life just passed away the other day. At 94 years old, and after a lifetime of changing the world through his singing, Pete Seeger’s angels decided it was time for him to move on. I suspect he’ll soon be busy strumming his banjo, the one that said “this machine surrounds hate and forces it to surrender,” in heaven.

nted to share with you one of my favourite songs performed by Pete. Some people know it as the “ticky tacky song”, but it’s really called “Little Boxes.” It was written by Malvina Reynolds, who also wrote the song about the rocking, rolling “Morningtown Ride.” Pete’s banjo-strumming version of “Little Boxes” became a hit record in 1963, when I was all of eight years old. Between that and the impact that his songs “If I Had a Hammer” and “Where Have All the Flowers Gone” had on me as a little girl, it’s no wonder I don’t fit into the mainstream. But, don’t get me wrong. I’m happy right where I am–as a writer and an environmental and peace advocate.

But, enough about me. Here are two versions of the great little song that satirizes suburbia and a conformist middle-class, “Little Boxes.” The first features Pete performing it solo in B&W, the second is a current and very clever version performed by Walk Off the Earth.

Walk Off the Earth’s version: http://www.youtube.com/watch?v=LM8JhvfoqdA

So long, Pete Seeger. It’s been good to know you.

Here’s an excerpt from my astrological forecast the other day. Although I left the part out strictly intended for us Virgos, I wanted to share what I thought was a rather insightful message from British astrologer, Jonathan Cainer.

Trees do not seek planning permission before they take root. Birds do not clear a flight-path before they take off. Rain does not request a licence before falling. It’s amazing how many natural processes can manage to occur without the intervention of the appropriate authorities. No doubt, in time, governments will find some way to regulate them. Meanwhile, it is nice to know that in a world of conformity and regimentation, there is still some scope for spontaneity….

I am hoping for more spontaneity and less control in 2012. What about you?

PS – Find out what the stars have in store for you and visit Jonathan’s website at www.cainer.com.

I’m sorry. I just can’t resist a silly pun. Can’t claim authorship. And, I don’t know who is to credit (blame?) for this pun either.